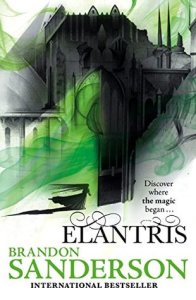 “… most supposed  miracles were either natural or the result of human intervention.”

Elantris was built on magic and it thrived. But then the magic began to fade and Elantris began to rot. And now its shattered citizens face domination by a powerful Imperium motivated by dogged religious views.

Can a young Princess unite the people of Elantris, rediscover the lost magic and lead a rebellion against the imperial zealots?

Brandon Sanderson’s debut fantasy showed his skill as a storyteller and an imaginer of baroque magical systems to be fully developed from the start.

END_OF_DOCUMENT_TOKEN_TO_BE_REPLACED

Hello friends! I am here to share with you the COSMEREALONG if any wants to join. I have never read a Brandon Sanderson book and I am always intrigued as to where I will start. But then I stumbled upon this readathon through Caz of LittleBookOwl in YouTube and of course I am joining. I’ll be linking the video down below for further reference.

But now, let me tell you the timeline of the readathon. So without further ado, let’s get into the books!