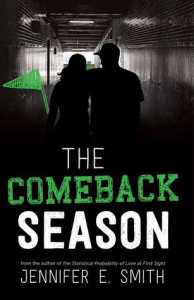 “… everyone will lose a good thing sometime in their lives.”

The last place Ryan Walsh should be this afternoon is on a train heading to Wrigley Field. She should be in class, enduring yet another miserable day of her first year of high school. But for once, Ryan isn’t thinking about what she should be doing. She’s not worried about her lack of friends, or her suffering math grade, or how it’s been five whole years since the last time she was really and truly happy. Because she’s finally returning to the place that her father loved, where the two of them spent so many afternoons cheering on their team. And on this — the fifth anniversary of his death — it feels like there’s nowhere else in the world she should be.

Ryan is once again filled with hope as she makes her way to the game. Good luck is often hard to come by at a place like Wrigley Field, but it’s on this day that she meets Nick, the new kid from her school, who seems to love the Cubs nearly as much as she does. But Nick carries with him a secret that makes Ryan wonder if anyone can ever really escape their past, or believe in the promise of those reassuring words: “Wait till next year.” Is it too much for Ryan to hope that this year, this season, might be her comeback season?

I have read a few books by Jennifer E. Smith and it was mostly a fluffy insta love story so I dive in this book expecting the same thing but I was wrong. This story revolves around grief, acceptance and love. And somehow it is deeper than any of J.E. Smith’s other books that I have read.

The story follows a girl named Ryan who still deals with grief even after her father passed away for years. She hold on to the memories and the little things that she and her father used to do when he was still alive. And this book follows her journey as she slowly accepts the fact that her father will never comeback and that she needs to move on.

I guess the reason why I really like this book is Ryan. I feel like I related to her in a lot of ways and we have a similar personality that’s why I feel so connected to her. Although I have not experience the loss of a father, I experience the loss of a grandmother who feels like a second mother to me. Moreover, I am the type of person who does not deal well with acceptance. I hate changes in general but as I grow older, I slowly accept changes for they are a part of life. But it’s not easy. That’s why I understand Ryan’s struggle with regards to acceptance and changes.

Another thing that I like about this book is you can see the parents being physically and emotionally present for the characters. I think as Ryan talks to her mother about the pain of losing, it’s what really helps her to accept things no matter how painful it might be. I really enjoyed that scene where they have a conversation. Because even though this is somehow a YA romance, you can still see the family element to it.

But the reason why I only gave it a 4-moon is because of the ending. I love open ending, but I am not a fan of how the author presented the open ending here. It leaves me wondering about what happened. It makes me wonder if that is just a possibility or is it as I think it is? Because if it is as I think it is then the ending is tragically beautiful. Heartbreaking, yes. But still beautiful.

I highly recommend this book if you’re looking for a story to warm your heart.

That’s all folks! Till next time!