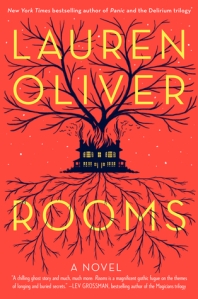 “The way I figure it, life’s the sum total of all our small mistakes, little tragedies, bad choices. Addition on top of addition.”

After her New York Times bestselling novels for young adults, Lauren Oliver returns with her first book for adults, a spellbinding novel that confirms her place as one of our finest storytellers. Rooms is a mesmerizing and suspenseful story of guilt, love, and family secrets.

Estranged patriarch Richard Walker has died, leaving behind a country house. His alienated family arrives for their inheritance—but they are not alone. Two restless ghosts linger within the house’s walls. Both the living and dead are haunted by painful truths that surface with explosive force. When a new ghost appears, the spirit and human worlds collide—with cataclysmic results.

Elegantly constructed and brilliantly paced, Rooms is an enticing and imaginative ghost story and a searing family drama, as haunting as it is resonant.

This book follows the story of a family drama and the ghosts of the people who used to live in the house. We follow every member of the family and the stories that they hide from one another; we also follow the story of the ghosts who lives in the house even after they died. It is a story about self discovery for all the characters, no matter how old, in relation to the people around them and the memories that they shared along with the dead. In a way it feels like a coming-of-age story.

Until now, after weeks of reading this book, I still don’t know how to clearly describe this. I thought that this book is a thriller because of the ghosts element but it is more of an adult drama even though there is a touch of mystery included in the plot. But to be honest, it might be the fact that I am expecting this to be of another genre which is why I did not enjoy it as much. The beginning of the story is boring and does not capture my interest. About halfway in the book, I still haven’t get the hang of it and I am still waiting for the mystery part of the story. It is only I until I Googled the genre of the book that I realized that it would not really fall in the mystery genre for the plot is more of a heavy drama than a mystery/thriller. That may have been a factor as to why I did not enjoy the book. I’m quite disappointed that it is not what I expected.

But other than that, the story is told in a multiple POVs; probably more than 5 because every character in the book has his/her own POV. This is one of those books where multiple POVs does not work well for me. I was confused and annoyed by most of the characters. It can be confusing because it is an alternating POVs between the past and the present; the POV of the ghost’s would always provide a story in their past life in relation to what’s happening in the present and I feel like I’m getting sidetracked with the real plot which is why I am so confused. It’s not until more than three quarters of the book that I can now detached the story of the ghost with that of the present.

The only thing that I like about this book is the ending; seeing how the characters finally come into terms with their own misgivings and mistakes not only to themselves but also to one another. It’s all about forgiveness, communication with the people who cared for you, and self discovery. It is one of those rare books where I like how the story wraps up rather than how the story begins and progressed. It’s only a 300 pages book yet it felt longer.

I tend to stay away from this genre because it never captured my interest. I also feel like when you read books in this genre, you need to condition your mind because it might have a heavy topic here and there. I feel like there is an important topic that the author is trying to relay to the readers with this book but because I did not condition my mind for this stuff, I only glean the surface of the book which is why I did not enjoy it that much.

Still, I think people should read this book. It is quite unique on my part because I have never read a book like this before. Definitely give it a try and I am interested to see if we will have the same opinion about this book.

That’s all for this review. Let me know your thoughts about this book if you’ve read it.