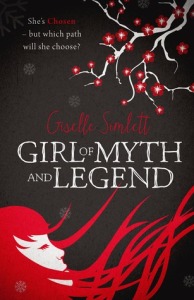 Leonie Woodville wants to live an unremarkable life. She wants routine, she wants repetition, she wants predictability. So when she explodes in a blaze of light one morning on the way to her college, it’s enough to put a real crimp in her day.And things only get weirder…Leonie learns from her father that she is last of the Pulsar, a phenomenally powerful member of a magical species called the Chosen. It will be her sole duty to protect the Imperium, a governing hierarchy, from all enemies, and to exceed the reputation of the Pulsar before her. So – no pressure there, then.Leonie is swept away from her rigorous normality and taken to a world of magic. There, she is forced into a ceremony to join her soul to a guardian, Korren, who is both incredibly handsome and intensely troubled, a relationship for which ‘it’s complicated’ just really doesn’t cut it.But Leonie is soon to learn that this ancient world is no paradise. With violent dissidents intent to overthrow the Imperium, and dark entities with their own agenda, she and Korren find themselves caught in a war where they will have to overcome their differences if they are to survive.Dare to dream. Dare to hope. Dare to be a legend.

Here is another dystopian book that somehow overused some tropes. This story is about a girl Leonie who does not know that she is the chosen one (most, if not all, of them don’t know that). Her father has been keeping this secret from her in order to protect her. (Parents! They always hide your true identity.) So when Leonie was trust in a world that she does not know and the weight of her role in this world finally sinks in, she began doubting as to whether her choice to be in that place is good.

I did not hate this book even though my introduction is a bit leaning on that side. The pacing of this book is okay. It has things that are happening here and there that would be enough to make you read the rest of the book but not enough to standout from its genre. After the hype of dystopian genre, I was expecting authors who wished to write story in the same genre to step up their game. Honestly, the story is predictable; even the main character’s attitude is predictable. And even though I’m saying that I do not hate the story, I think I might say that I hate the main character. At some point in this book, I do not want to be inside her head. It’s annoying how she goes from “I can do this!” to “I’m not fit for this!” WHY?!?! Why does every chosen one who does not know that he/she is the chosen one needs to be this annoying?!

And don’t get me started with the “past” that the synopsis has pointed out. I understand Korren’s grief but Leonie? I don’t know… It is okay to grieve but there is a part in this story where she BLAMES the person for leaving her. I guess she needs a reality check because the world does not revolve around her. And then her world turns upside down and she is the apple of the eye of everyone and SHE. DOES. NOT. WANT. IT. Ugh!

Anyways, when it comes to the plot of this book, I feel like it lacks the world building because it is hard for me to imagine the world. And at some point an accurate description of this story is Red Queen meets Twilight. I don’t know why but I imagine it to be like that. Nothing in this story leaves a mark in me except how annoying Leonie is. But other than that it is an okay book. The kind that you would read but would forget eventually.