Two books that I would surely have in my shelf revealed their book cover! And let’s face it, we always judge a book by its cover. Shall we judge these two?

END_OF_DOCUMENT_TOKEN_TO_BE_REPLACED

“Anyone can betray anyone.”

This is a world divided by blood – red or silver.

The Reds are commoners, ruled by a Silver elite in possession of god-like superpowers. And to Mare Barrow, a seventeen-year-old Red girl from the poverty-stricken Stilts, it seems like nothing will ever change.

That is until she finds herself working in the Silver Palace. Here, surrounded by the people she hates the most, Mare discovers that, despite her red blood, she possesses a deadly power of her own. One that threatens to destroy the balance of power.

Fearful of Mare’s potential, the Silvers hide her in plain view, declaring her a long-lost Silver princess, now engaged to a Silver prince. Despite knowing that one misstep would mean her death, Mare works silently to help the Red Guard, a militant resistance group and bring down the Silver regime.

But this is a world of betrayal and lies, and Mare has entered a dangerous dance – Reds against Silvers, prince against a prince, and Mare against her own heart.

END_OF_DOCUMENT_TOKEN_TO_BE_REPLACED 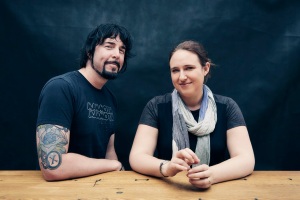 The book 2 for The Illuminae Files already has a synopsis!! I’ve been following Amie Kaufman on Instagram since the first book of Starbound and she posted about it a couple of days ago. And because I want to share my hype with you, I’ll post the synopsis here!

Moving to a space station at the edge of the galaxy was always going to be the death of Hanna’s social life. Nobody said it might actually get her killed.

Hanna Donnelly is the station captain’s pampered daughter; Nik Malikov the reluctant member of a notorious crime family. But while the pair are struggling with the realities of life aboard the galaxy’s most boring space station, little do they know that Kady Grant and the Hypatia are headed right toward Heimdall, carrying news of the Kerenza invasion.

When an elite BeiTech strike team invades the station, Hanna and Nik are thrown together to defend their home. But alien predators are picking off the station residents one by one, and a malfunction in the station’s wormhole means the space-time continuum might be ripped in two before dinner. Soon Hanna and Nik aren’t just fighting for their own surivival; the fate of everyone on the Hypatia—and possibly the known universe—is in their hands.

But relax. They’ve totally got this. They hope.

END_OF_DOCUMENT_TOKEN_TO_BE_REPLACED

Murder in the lab! The famous forensic scientist Dr. Ramachandran is stone-cold dead, and Ruby Rose’s father is the prime suspect. It’s one more reason for Ruby to hate the Gardens, the funky urban neighborhood to which she has been transplanted. Wise but shy, artistic but an outsider, Ruby must marshal everything and everyone she can to help solve the mystery and prove her father didn’t poison his boss. Everyone? The list isn’t too long: there’s T. Rex, Ruby’s big, goofy but goodhearted friend; maybe those other two weird kids from class; and that mysterious old lady in the apartment upstairs, who seems to know a lot about chemistry . . . which could come in very handy.

END_OF_DOCUMENT_TOKEN_TO_BE_REPLACED

I pledged that 2016 will be a new year for me when it comes to book blogging. So I decided to do monthly wrap-up as well.

January is a good reading month for me. I’ve read a total of 5 books. I managed to squeeze in a couple of books when school started in the 3rd week of January.