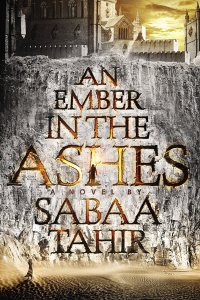 “All the beauty in the stars means nothing when life here on earth is so ugly.”

Laia is a slave. Elias is a soldier. Neither is free.

Under the Martial Empire, defiance is met with death. Those who do not vow their blood and bodies to the Emperor risk the execution of their loved ones and the destruction of all they hold dear.

It is in this brutal world, inspired by ancient Rome, that Laia lives with her grandparents and older brother. The family ekes out an existence in the Empire’s impoverished backstreets. They do not challenge the Empire. They’ve seen what happens to those who do.

But when Laia’s brother is arrested for treason, Laia is forced to make a decision. In exchange for help from rebels who promise to rescue her brother, she will risk her life to spy for them from within the Empire’s greatest military academy.

There, Laia meets Elias, the school’s finest soldier—and secretly, its most unwilling. Elias wants only to be free of the tyranny he’s being trained to enforce. He and Laia will soon realize that their destinies are intertwined—and that their choices will change the fate of the Empire itself.

An Ember in the Ashes is a book whom I’ve heard from so many booktubers. It is the debut novel of Sabaa Tahir. This book is getting so many hyped on the book world and I took my time in indulging the story and transporting in the world that the author created.

Some books have two or three POVs which more or less confuse the reader, annoys them or they might found it unnecessary. But An Ember in the Ashes is not one of them. The dual POV binds the story in a way that would help you understand the world-building of the story, the surroundings of the characters, and how they were raised as a child. The upbringing of the characters is also important because it certainly affects their actions. An example is Elias; he was raised by tribesmen compared to his classmates in Blackcliff that’s why he is not really fond of the system of the Martials.

Other than the dual POV, another thing that I like is the character development specifically Laia. Laia’s character development is not that slow but not that fast. She is weak at the beginning of the story but the things that she endures just to save her brother are remarkable. She is a spy and her life is at risk but she endures it all, even the Commandant’s punishment when she commits little mistakes. I like her determination. In the beginning, she doubts herself though she disregards the thought immediately as she thinks of her brother, but as the stories go on she is gaining her confidence and she knows perfectly well what she wanted to do ever since.

I also like how the author weaved the story; the Trials, the premonitions of the Augurs – which is poetic & fascinating – and how the said premonitions unfold. It may seem confusing at first but at the end of the book, it all makes perfect sense.

There is a certain topic in the story that I would like to point out. It’s the inequality between men and women. Most of the Scholar women who are slaves are beaten up and being raped by the Martials and it is okay in the book. The Martials are not punished for it. It is common to do such things to slaves because they are only slaves, a thing that they can throw away. But such inequality is also seen in Blackcliff because most of the students are male and only one female is allowed for every batch of students who entered Blackcliff. Ironically the Commandant is a woman. There is something about this topic that I can’t point out if it annoys me or makes the story more interesting for me.

There is also a touch of fantasy in the book. About 20% I guess? There are magic powers (I call them magic powers) and the ability of the Augurs which adds a little touch to the story that made it unique. In a way, I can somehow compare the Augurs to the Silent Brother in the Mortal Instruments.

I like Laia as a character and also her part in the story. But I really don’t know if I like Elias. There are moments where I like him but there are moments where I want to shake him so hard! He has this attraction to Laia, which is the slave of her mother but he also has this lustful attraction to his best friend, which is the only girl in their batch. But I hate it when he’s losing in their training just because he is bothered by his best friend, Helene, and Laia. He is the top of his class yet he gets distracted by these girls. I suppose his distraction when it comes to his issues about girls is caused by his lack of a female company that’s why he is not handling it well. It makes me want to shake him though. They are trained to set aside emotions and yet he is not that good in handling it. Then again Elias’s mind single him out from the rest of the Martials and Mask because you can really see the struggle of how much he hates what he is forced to do. Laia brings out the best in him, I guess. When his emotions are all drowning him, he will hold on to Laia’s words and he will manage to keep his hold on things.

And also his best friend Helene annoys me! They are letting their emotions get a hold of them especially when the two of them are fighting. I would like to see more of the issues concerning the system, the emperor and yet all I can get is “the emperor is near”. I would like to know more about what’s happening in that aspect of the story rather than Helene being protected by a threat of being raped by their enemy or their fights.

They first stated that this book is stand-alone IF it’s stand-alone then I have a list of questions that have been left unanswered as the story end. But thankfully it’s not!! I’m very excited for the second book which will be released next year BUT there is no title yet!

Giving it 4.5-Moon because some parts of the story are predictable. Nonetheless, some things still caught me off guard. I really enjoy stories that made you think that it is predictable but it’s not really. I enjoy this book, I’m a sucker for Dystopian and Fantasy so I like it.

I highly recommend this book! This is a page-turner that will leave you wanting more! There lots of characters to hate and love! And although it’s not much on the romantic aspect, there are moments where a smile will creep in your mouth because of the characters.